A completely new battleship design, introducing the concept of "all or nothing" armor. Although barely larger than the previous class, they were much better, more effective ships, and they set the pattern for all US battleships up to the Washington Treaty. They were also the first US battleships with triple turrets. The Nevada class was part of the "Standard type battleship" concept of the US Navy, a design concept which gave the US Navy a homogeneous line of battle (very important, as it allowed the Navy to plan maneuvers for the whole line of battle rather than detaching "fast wing"s and "slow wing"s). The "Standard" concept included long-range gunnery, moderate speed of 21 knots (39 km/h), a tight tactical radius of ~700 yards (640 m) and improved damage control. The other Standards were the Pennsylvania, New Mexico, Tennessee and Colorado classes.

A completely new design. There were four main turrets, two dual and two triple, arranged in superimposed pairs fore and aft. Most of the secondary battery was housed in casemates on the main deck, with five guns in second-deck casemates, aft. All the casemates, especially the forward-most ones, were found to be excessively wet, and the 9 wettest guns were removed early in the ships' careers. There was nearly 40% more armor (by weight) than in the previous class, and it was used more efficiently, because the turrets were concentrated in a shorter length. These ships, like the Delaware class, had competing machinery installations - turbines vs. VTE; Oklahoma's VTE equipment made her clankier, less reliable and more vibration-prone than her sister. Both ships were the first to use oil fuel as their primary fuel. Superstructure was minimal, consisting mainly of the armored conning tower; there were two large cage masts, and a single funnel. 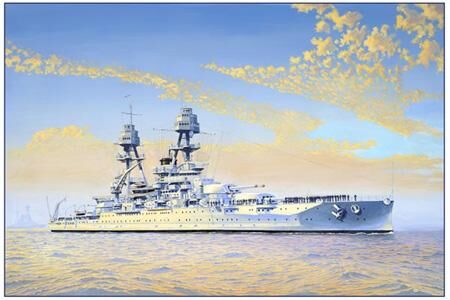 Both ships underwent major reconstructions during the 1930's; their modernizations set the pattern for subsequent ships. Both were fitted with new boilers, improved internal torpedo protection, and external bulges for added protection and stability. The armored deck was increased in thickness by two inches, and the maximum elevation of the main battery was increased to 30 degrees. The secondary battery was reduced and relocated from the hull to the 01 level deckhouse; a heavy AA battery was fitted atop this deckhouse, at the 02 level. The torpedo tubes were removed. The superstructure was extensively modified and enlarged, new tripod masts replaced the cages, and new fire controls were fitted. Nevada also received the turbines removed from North Dakota in place of her original turbines; Oklahoma retained her VTE engines.

Nevada underwent a partial reconstruction following Pearl Harbor, intended to give the greatest capability possible in a limited time, at relatively low cost; a complete reconstruction was ruled out by her advanced age. The old secondary battery was removed and replaced by 8 dual 5"/38cal DP; numerous 40mm and 20mm AA were fitted. The aft tripod mast was removed, and the forward fire control top dramatically reduced in size; new directors for the new secondary battery were fitted. The superstructure was cut down and simplified, and the armored conning tower was removed. Displacement increased to over 33,700 tons full load. This configuration was quite close to her "ultimate" planned configuration, except in the number of secondary and AA gun directors, and in the number of light AA guns. Following this reconstruction she remained essentially unchanged through WWII, except for the gradual addition of more 40mm and 20mm AA guns, and minor modifications to the superstructure. By the end of WWII, she had 10 quad 40mm AA, 20 twin 20mm AA, and 5 single 20mm AA.

Oklahoma was sunk at Pearl Harbor; although salvaged, there was little serious consideration of rebuilding her, her guns were used to regun Pennsylvania, and she was hulked. Nevada was expended as a target ship after the war.

Community content is available under CC-BY-SA unless otherwise noted.
Advertisement