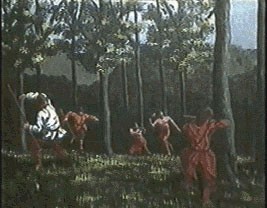 The Battle of Blue Licks, on August 19, 1782 was the last major battle of the American Revolutionary War. The battle, which took place in the frontier country of northern Kentucky, near the present-day town of Blue Licks Springs in Robertson County, occurred almost ten months after the surrender of the British commander Cornwallis at Yorktown. The Battle of Blue Licks was a decisive victory for a combined invasion force of 1000 British regulars and Native Americans from the Ohio nations, over a force of 180 Kentucky militiamen. It is considered by historians to be the "low point" for the Americans, in the struggle for possession of the western country beyond the Appalachian Mountains.

Prior to the battle, a force of approximately 50 British regulars and Queen's Rangers, under Capt. William Caldwell, together with a force of Iroquois and Mingoes, under Mohawk leader Joseph Brant, had moved southward from Detroit to attack the American settlement at Wheeling, on the Ohio River. At the same time, a congress of the Ohio nations, at the principal Shawnee village of Chalahgawtha along the Little Miami River met on August 2. Simon Girty, one of the organizers of the congress, heard of the British and Iroquois invasion force and sent a messenger to intercept them, with the intention of creating a combined force to move against the Americans.

The plan was enormously successful. The bulk of the British and Ohio nations force hid at Blue Licks, a salt lick on the Licking River, while a small party attacked Bryants Station, purposely allowing a few survivors to escape, to notify the Kentuckians at Lexington about the attack. A force of approximately 180 Kentuckians, under a group of various leaders in cooperation, set out in relief. Lt. Colonel Daniel Boone led a force of 45 militia from Fayette County, under the general leadership of Colonel John Todd. Another major contingent was from Lincoln County, under the leadership of Colonel Stephen Trigg, assisted by Major Hugh McGary of Harrodsburg, who had lost his family in an attack by Native Americans five years before.

The Kentuckians arrived at Bryants Station, to find the Native Americans gone. The Kentuckians advanced against the "fleeing" Native American decoy force, which purposely had left an easy trail to follow, allowing the Kentuckians to catch up to them at a bend on the Licking River, where the rest of the British and Native American force lay concealed, in wait. Unaware of the larger force, the Kentuckians faced a decision of whether to immediately attack, or to wait for reinforcements from Colonel Benjamin Logan, who was advancing a day behind them with a force of approximately 200 men.

Boone had grown increasingly suspicious of a trap, from the obvious trail left by the fleeing Native Americans. At the officer's council, however, McGary was insulted at the "implication of cowardice" on his part, and impulsively led a charge across the river. In the resulting hand-to-hand combat during the ambush, 72 of the 180 Kentuckians were killed, with the Native Americans and British losing only three, with four wounded. Among the dead were Colonels Todd, Trigg and fourteen other officers, and Boone's son. The contingent including Daniel Boone was ambushed in a ravine, and within a few minutes, the out-numbered Kentuckians were driven in panic back across the Licking River.

The Battle of Blue Licks was exactly ten months after the Battle of Yorktown, which was unofficially the end of the American Revolution.

The battle site is commemorated at Blue Lick Battlefield State Park, on US 68 between Paris and Maysville, just outside the town of Blue Licks Springs. The site includes a granite obelisk, burial grounds and a museum.

Community content is available under CC-BY-SA unless otherwise noted.
Advertisement